And here we are again, for another round of fabulous partnerships and beady goodness, hosted by the incredible Lori Anderson and her hubby Rick :)

Despite having an incredibly rough year, Lori has once again dived in and set up another great, world wide party, with close to five hundred participants! :)

This year, I was partnered with Audrey Belanger, a fellow Canadian. Audrey sent me a fabulous soup that I managed to stretch my wings with ;)

As a refresher .. here's the fabulous soup she sent me to play with... 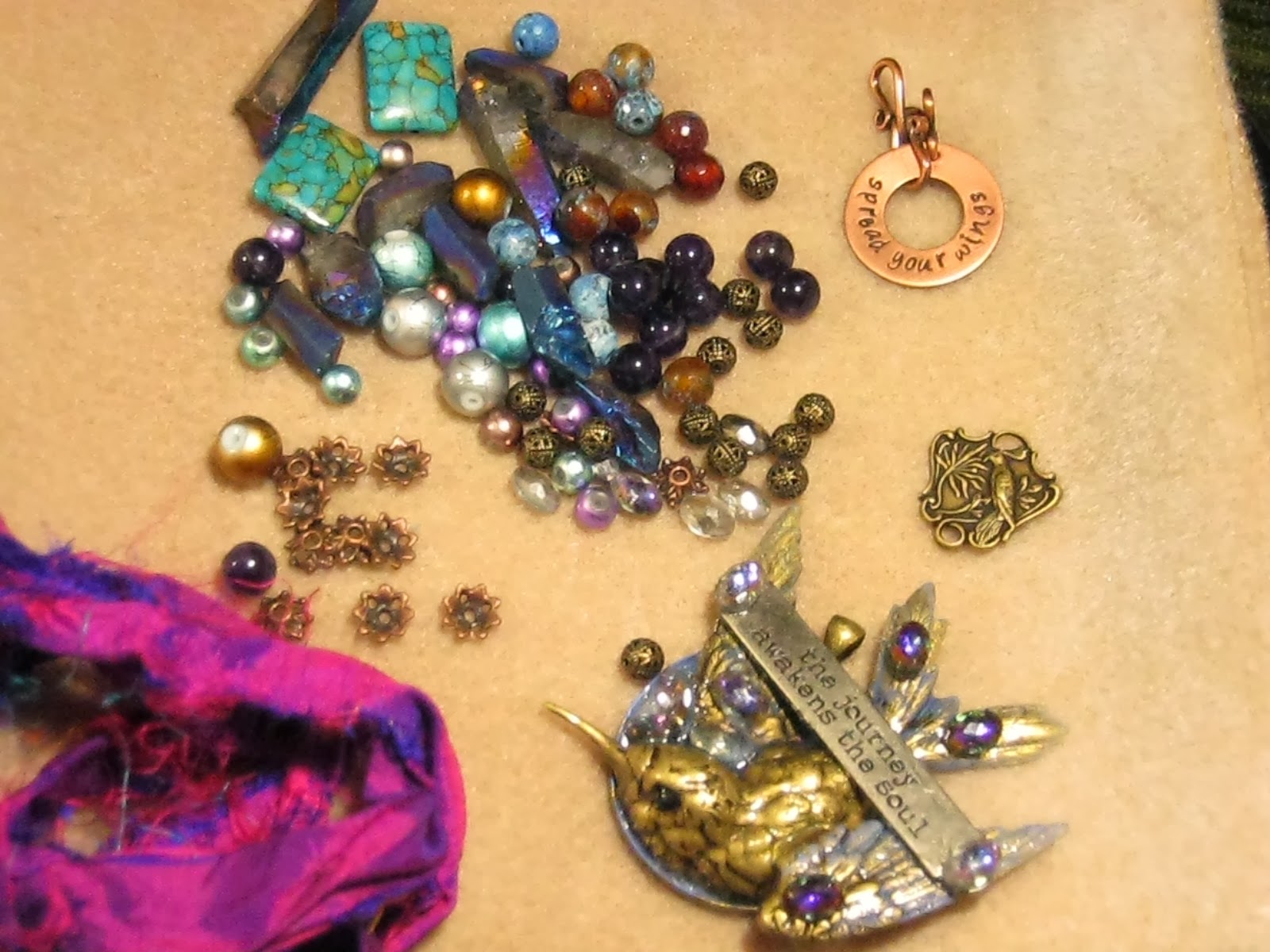 And here is what I created while playing :D To start, yes I know I said I'd push myself with the spiked to NOT do earrings... tough. I did however, take the two largest to make these, and I LOVE them. I've worn them several times now and they are officially among my favorites :) Next I'll show you some of my foray into very minor chainmaille... and *gasp* 'mixed metals' >.< Which I ended up loving , I might add. Here is the little bird brass stamping form Audrey that added a touch of colour too. A bit of nail polish in an antique copper-ish tone. I also added the same colour to the clasp :) (btw, the open link there... I fixed it but didn't retake the pic, sorry >.< lol) 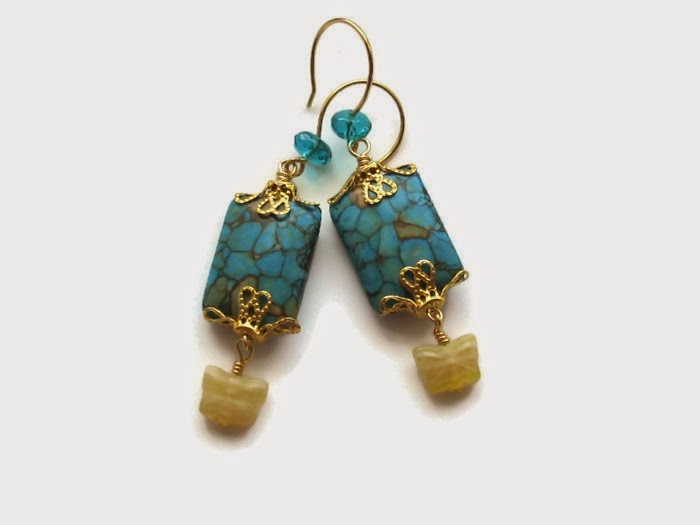 Sticking with the 'wings' theme, but detouring from birds to butterflies... some bright, summery earrings. Truth be told, these were NOT supposed to be earrings at all...I had these findings and stones all set aside to be a bracelet, and had created a little butterfly focal for it... then hated the focal and tada, the earrings were born lol 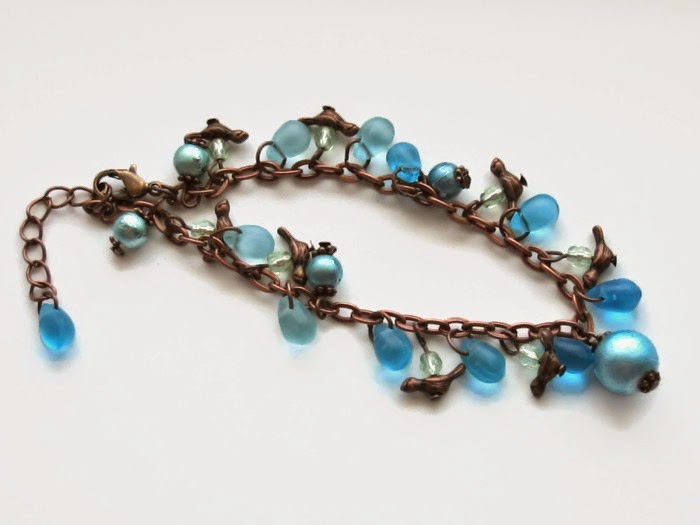 Back to the birds... a simple adjustable bracelet featuring some faux sea glass teardrops I bought ages ago and never even took off the strand until now, and some of the cute little copper birds I sent along with my soup to Audrey :) From the soup she sent me, I've used some of the Spectra rounds.. again, I had a different piece in mind that used all of these beads but in the end only the pretty teal ones jumped forward to be used. 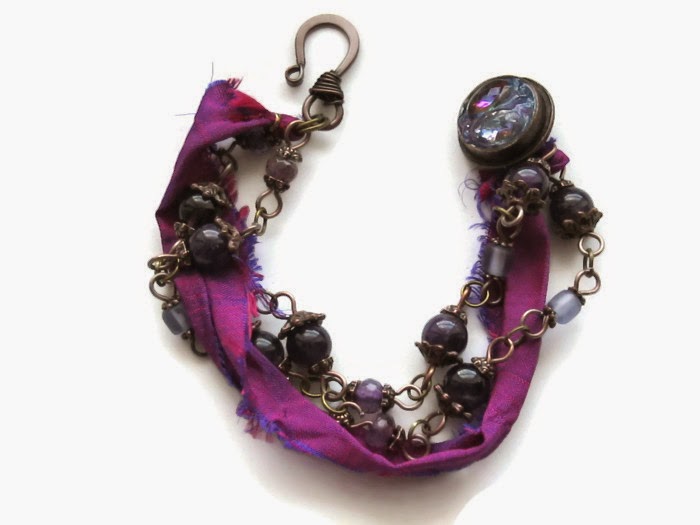 The sari ribbon found it's way into two pieces; this bracelet is one of them. That beaded chain uses the amethyst rounds from the soup, along with the beadcaps. The chain was actually the first thing I made, intending for it to go with the focal... That clasp I made to go with the focal as well... then decided both the chain, and the focal ( which uses some of the little crystals from the soup ) , made the piece look to heavy. And so.. tada... bracelet. :) 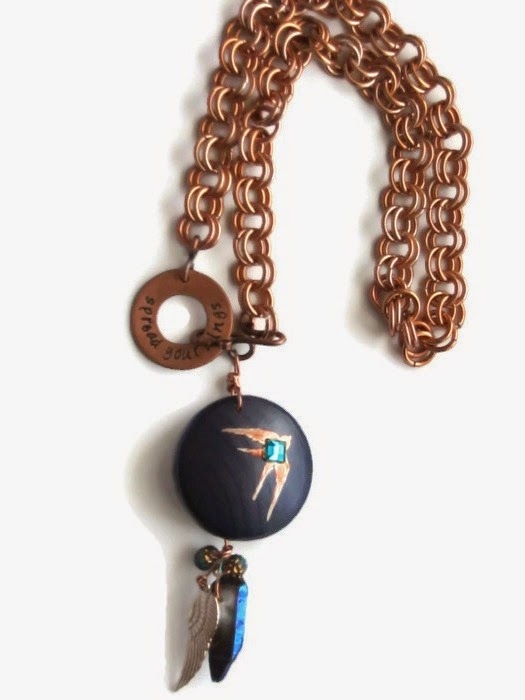 Here is another piece that used up some long 'forgotten' parts of my stash. The clasp is of course, from my soup, as is the shard. The chain is made of some rather large copper coloured aluminum rings that have been sitting here mocking me forever.

The pendant is wood, and the bird image on it was originally silver in colour. I pulled out the nail polish to recolour it carefully, then glued on the little blue-green stone. There two cathedral beads hanging beneath with the shard and the wing ( also nail polished ;) ) are the same colour. 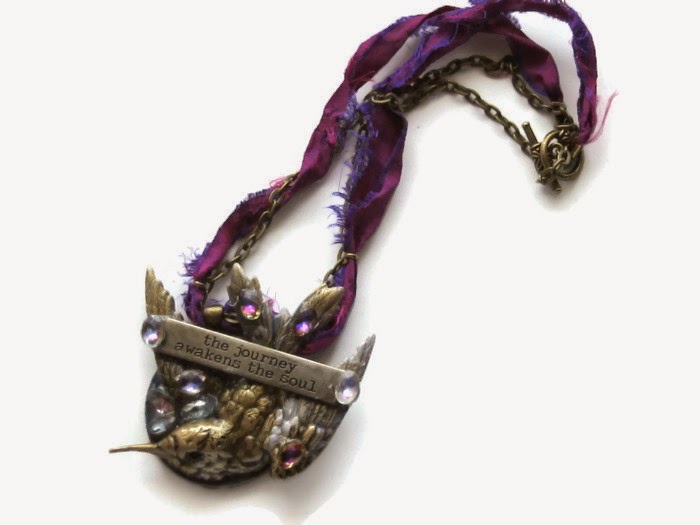 And of course, the focal.

After much hemming and hawing over what to do, I went with a simple brass chain paired with the sari ribbon. I think it works best with the attention being fully on the focal.

I found the weight of the focal kept making it hang crooked, so I used a bit of apoxy putty and a piece of brass wire to make a second bail at the back behind the tail. The two bails let the piece hang evenly and placates my ocd over things like that ;)

And so there we have another successful round of the BSBP... this one more so than previous rounds since I not only pushed myself outside my box a bit more, but I also finished my pieces EARLY! No last minute rush to get things done followed by midnight photos with crappy lighting and photoshop to try to make them passable >.< lol This year, they were done on time and the pictures were taken in daylight... albeit through a window since it was still a tad nippy outside ;)

Thanks again to our amazing hostess Lori and her equally amazing hubby, Rick, as well as all of the people who chipped in to help make this round happen.

As well, a special thank you to my partner Audrey for such a wonderful soup to play with :) I've decided that despite the fact that many of the pieces are 'not my style' for wearing, I'm keeping them and going to wear them :) See...? Still pushing myself outside my box ;)

Okay... you know what? I lied. I'm not keeping ALL of what I made. I think I'll share one piece with one of you :)

* Update ! The first giveaway for the butterfly earrings show above is over and the winner has been emailed!
HOWEVER... for those still hopping, There's is a second giveaway now running, for a shorter version of the crystal spike earrings above. The spikes are about half the size as the ones shown, and I used a finer gauge copper for the wrap so the crystal wouldn't be hidden beneath it ;)

So if you'd like to win the spike earrings, just fill out the rafflecopter form and you're in :) There are two entries available, although only one is mandatory, so if you do both, that's two chances to win :) Blog subscribers, you have to click through to the actual post itself in order to see the rafflecopter widget. :) EVERYONE who entered the last giveaway on this post, are already entered! ( except the previous winner ;) )
This will run the full week to give more hoppers a chance to get their entries in :)

a Rafflecopter giveaway
Posted by Skye at 12:05 AM 101 comments: